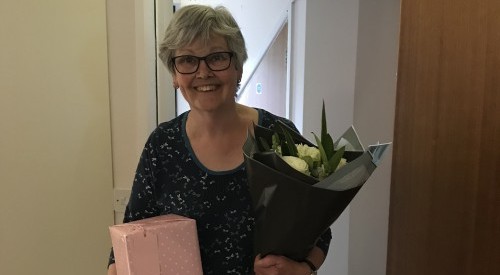 Ann came to Catholic Care in January 1992, after working at Hilton Grange Residential School in Bramhope. Initially a Care Officer at St Mary’s, our children’s home in Boston Spa, Ann progressed to the role of Senior and was Deputy Home Manager for a while. I am sure she will have many tales to tell about the children she cared for during her many years at St Mary’s. She certainly saw lots of changes in childcare trends. Ann stayed at St Mary’s until its closure in April 2006.

Ann’s next venture in her Catholic Care journey was a move across to the Learning Disabilities team and the sunny climes of Bingley where she has been supporting tenants at Crownest Lane for the last 12 years. This was a relatively seamless transition and Ann settled very quickly into this new and very different role. She became a key worker for a number of people and was instrumental in supporting them to make real changes in their lives.

Ann has been, without doubt, a committed and loyal employee of Catholic Care and will be greatly missed.

26 years in total for Catholic Care – what an achievement