Over 120 people attended the Diocesan Refugee Response: One Year On event on 31 January 2018 at Hinsley Hall. Parishioners attended from across the Diocese as far afield as Settle, Huddersfield, Mytholmroyd, Wakefield and Knaresbrough – as well as from nearby parishes in Leeds and Bradford. As in November 2016, and in spite of the wintery weather, the response was fantastic and there was a flurry of activity at the start of the evening to squeeze as many people as possible into the room.

The meeting was led by two members of the Diocesan refugee Support Group, Carol Hill, Director of Catholic Care, and John Battle, Chair of the J&P Commission.

Carol Hill welcomed everyone and started the evening with a short film prepared by Catholic Care highlighting the work of the Gianna project which is more often being called upon to support asylum seeker and refugee families . Bishop Marcus invited the meeting to join him in prayer and gave a brief reflection on his visit to PAFRAS (Positive Action for Refugees and Asylum Seekers) that had taken place earlier in the day. Carol explained that the purpose of the evening was to act both as an update of the work taking place in response to the plight of refugees and asylum seekers and also to connect those wanting to be involved with a variety of volunteering opportunities.

First to present was Sean Ryan MBE , who is the CSAN Coordinator for the Government Community Sponsorship Scheme to settle Syrian refugee families in the UK. Sean updated the meeting saying that this is a growing area of action in the Church with many Parishes who have already initiated the application process with the Home Office to act as Community Sponsors. 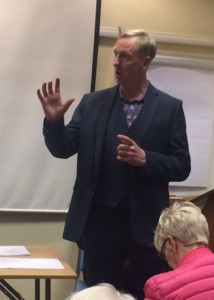 The aim of the scheme is for Parish communities to take responsibility for sponsoring a refugee family, supporting them in daily life and helping them to become fully integrated into the local community. There were some very positive stories both in terms of integration and also how parishes had become stronger by working together to share the responsibility. Sean Ryan asked those gathered to take away the information and to consider if this would be something that we could take on. Carol confirmed that there would be a follow up meeting called for those interested.

John Battle then introduced several organisations working across the Leeds Diocese area who need additional volunteer support. Each had a few minutes to tell their story and make their appeal for volunteers. John also added that, rather than thinking that it was up to everyone at the meeting to individually volunteer it would be so much more powerful if they were to take information back to their local church community and to personally pass it on to at least three other people.

Julie Linley, told us about the work of the St Vincent’s Centre in Leeds and CHAS@StVincent’s in Bradford. This includes English language lessons, immigration advice and help with filling out all manner of forms – as well as helping people with more general queries, food parcels and clothing. We were also invited to remember the work of the parish based SVP conferences that do so much to support refugees and asylum seekers.

We heard from Dot Read and Helen Parkin about the Conversation Club that is held weekly on Thursday afternoons at the Mill Hill Chapel in Leeds City Square. Within a year, this has grown from being a small gathering of volunteers and asylum seekers to a thriving and essential part of the support network in Leeds. They provide refreshments, friendly conversation, games and activities as well as signposting to more structured support.

Brian Hamill, from Wakefield City of Sanctuary, described the situation for the destitute asylum seekers whom they encounter and those associated with the Initial Accommodation Centre in Wakefield. In contrast to the Syrian families in the resettlement scheme, failed asylum seekers have no recourse to public funds and no security of accommodation or food. Brian was keen to stress the immorality of leaving people in this situation, sometimes for many years. 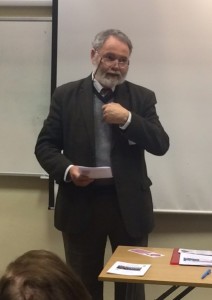 We heard from John McLaughlin and Sheelagh Pickles, members of the St Monica’s Housing. They gave a brief history and summary of the role of this project which currently provides accommodation for 6 destitute asylum seeker women in Leeds. They emphasised that they need more volunteers to help with running the house and will need a new house committee for a second home that they are hoping to open soon.

Liz Maddocks, of Migration Yorkshire, gave us a brief update on the current migration situation from the perspective of national and local government. Migration Yorkshire is a key partner in the Connecting Opportunities project. With funding from the Big Lottery and the European Social Fund, this project is active across the region to help migrants to develop their skills and opportunities to find work and be part of the local community.

Finally, to highlight the Spaces of Sanctuary photographic exhibition, two former asylum seekers, who have been helped by, and now volunteer for, the Refugee Council, told a little of their stories. One has been in the country for 16 years – but only in the last three years has she obtained leave to remain. The other was on the verge of suicide and it was only the kindness of a GP that enabled her to turn a corner and keep going.

For more information about any of the organisations mentioned or to discuss further actions that your parish would like to consider, please get in touch with the Diocesan Refugee Support Group Facilitator, Lucy Irven, by email: lirven@catholic-care.org.uk or phone: 07739 975 020.