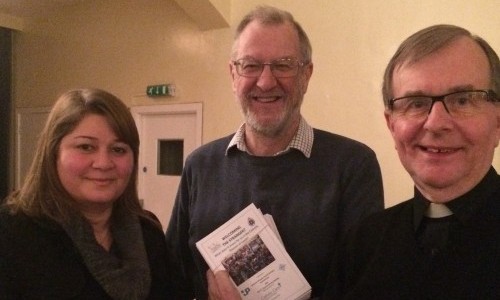 On a cold, dark Tuesday evening in January, over 60 parishioners from the Leeds North Deanery attended an information evening to learn how they could help and support refugees and asylum seekers. Many had attended the Information evening held at Hinsley Hall in November last year and were keen to learn how they could make a contribution to the Diocesan response and personally respond to the humanitarian crisis.

The evening was hosted by the Parish of St John Mary Vianney in the hall at the church of Immaculate Heart of Mary on Harrogate Road. Carol Hill (Director of Catholic Care) and John Battle (Justice & Peace) presented the evening. Carol started with a short slide show setting out the scale of the problem which was followed by members of the Diocesan Refugee Support Group sharing the work and activity undertaken to date through St Monica’s Housing. SVP, Justice and Peace and Catholic Care.

John Battle then introduced a lady from Iraq who with her family 16 years ago, had been forced to leave her country due to their Christianity. They were not refugees or asylum seekers but she spoke openly about the difficulties of moving to a new country to start a new life from scratch after having left everything behind. At first people did not speak to her but then St Paul’s parish made her and her family feel welcome and included within Parish life.

John Battle then energised the room with suggestions of how to get involved. He stressed how important it was to work with others and everyone can help in what ever way they can.

The meeting closed with a prayer from Father John Carter.