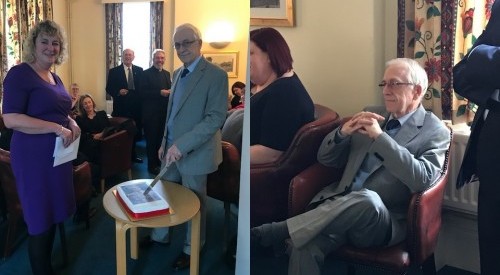 Monday 10th January was indeed a momentous day. A day when friends, former colleagues, fellow Trustees and current staff of Catholic Care gathered to say a heartfelt thank you to Stuart Hanlon for his dedicated service to Catholic Care over the past 44 years.

The day started with a Mass of thanksgiving in the Hinsley Hall Chapel celebrated by Bishop Marcus, who is Chair of Catholic Care’s Trustees. A fellow Trustee, Mgr. Rosser, delivered the homily where he spoke warmly of Stuart, emphasising the respect he always had for others and how this has contributed to his management skills. This was followed by a lively lunch.

Carol Hill, current Director of Catholic Care, reminded those present that this was not the first time Stuart had marked his retirement. The first occasion was when he retired as the Director in 2002. However, as Carol emphasised, “in both these roles Stuart has devoted 44 years to Catholic Care, living his faith through the action of caring for and supporting vulnerable people across the Diocese of Leeds.”

Carol reminded Stuart of his first encounter with Catholic Care, or the Leeds Diocesan Rescue Society at it was then back in 1963. He was a sixth form pupil at St Bede’s Grammar School and joined a singing group to raise money for the Christmas Appeal. He presented the cheque to Canon Kelly never imagining that he would in the future stand in his shoes.

Stuart started his working life at Catholic Care in 1973 as a youth worker before progressing to principal Social Worker, Principal Officer, Assistant Director and finally, in 2002, Director. In fact Start was the first Lay Director following in the shoes of Canon Maguire. Stuart paid tribute to his predecessors acknowledging how he was rigorously tutored by Mgr. Murphy and encouraged by Canon Maguire to work along side him which proved to be an excellent grounding for when he took over full responsibility.

During his time employed at Catholic Care the Schools Service was of a special interest to Stuart and he was responsible for laying the foundations of what is today the very successful Schools, Children and Family Wellbeing Service, supporting so many children, families and teachers in schools across the Diocese.

In 1993 Stuart proposed to the Trustees that the current name of Catholic Care be adopted to reflect a broader base of services. With the closure of the large mental institutions smaller group homes were being established to care for and support people with a learning disability and mental health issues. The care of vulnerable adults now forms a large part of the Catholic Care services with some of the first homes established still caring for people today.

Stuart retired for the first time in 2002 but could not say good bye to the Charity, which had been such a big part of his life for so long. He became a Trustee that same year and continued in this role until the end of 2017 when he retired for the second and probably final time. Stuart was visibly moved by the day, reminiscing about people he had known along the way saying “its been such a huge part of my life”.