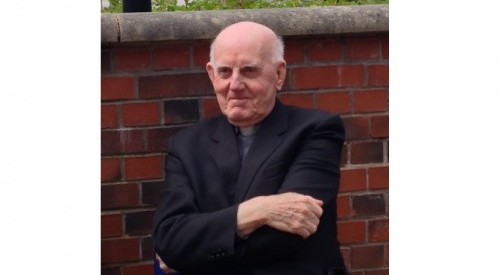 It is with great sadness that we write to let you know that Mgr. John Murphy passed away on Monday 29th January 2018.

In 1962 Mgr. Murphy was appointed Assistant Administrator before taking over the full reigns in 1969. He held this post until 1982 when he became Vicar General of the Diocese. Following this he continued his involvement with the Charity taking on a very active role as Trustee, a position which he held until 2007.

During his 58 years working with the Charity the world moved on at great pace. The early years saw the recruitment of trained and experienced staff. This was just the start of the regularisation and professionalisation of children’s services. During the early 1970’s partnership working the Social Services Departments of Local Authorities began; the world was rapidly changing.

When Catholic Care celebrated its 150th anniversary in 2013 Mgr. Murphy took an active role in the celebrations. He recalled reading through some of the reports he had prepared and how they evoked happy memories of the growth and expansion of the society. Back in 2013 he said “Our Diocesan story of the care of children is indeed an honourable one” he gave the credit for this to the Priests, Religious Orders and dedicated lay people of the Diocese, yet throughout he was the consistent rock.

Change is still happening fast today but it is thanks to Mgr. Murphy who laid such a strong foundation that we can respond with confidence and continue to evolve our services.