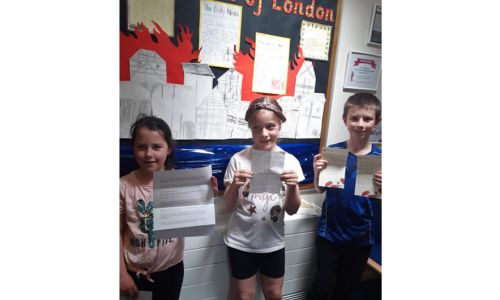 Being connected is fundamental to human existence – we are after all social beings.

Those connections we build as we journey through our lives can fragment as we age and as we get older we might find ourselves on our own.
Catholic Care’s older people’s groups reach out to communities, encourage people to come together in a safe place to chat, exercise or enjoy a hearty lunch, and all this while having fun.
When “Lockdown” became the reality for us all we knew it was going to impact on people feeling isolated and lonely. Many people in our groups not only found themselves needing to self-isolate but for some they needed to shield. People living with Dementia found their routines disrupted, there was real danger people would lose confidence and lose the connections, the friendships made while attending our groups.
Catholic Care had a role in producing the Embrace Toolkit providing details of safely setting up a pen pal scheme. Michelle Vink, one of Catholic Cares development workers for older people’s groups was aware that St John the Evangelist school was providing a service for keyworker children. Michelle has worked in partnership with schools having set up intergenerational projects and so, was born the idea of a pen pal scheme. Once this was mentioned as an idea to Sarah Kenyon from St John the Evangelist she responded enthusiastically, organised and inspired the children to write letters individually to our older people. Both generations were about to benefit.
The older people were quite overwhelmed to receive interesting letters full of information from the school pupils, and the great pleasure for Sarah was seeing the children’s faces full of wonder having received letters in return. For some school children it was the first time they had opened a handwritten paper letter.
The pen pal scheme continues to thrive and there are plans for the connections being made to carry in to the future by the children providing afternoon tea at school when people are allowed to meet in person once again. Thank you to all who have been involved.